Home > Blog > How can immunotherapy be effective for brain cancer?

How can immunotherapy be effective for brain cancer? 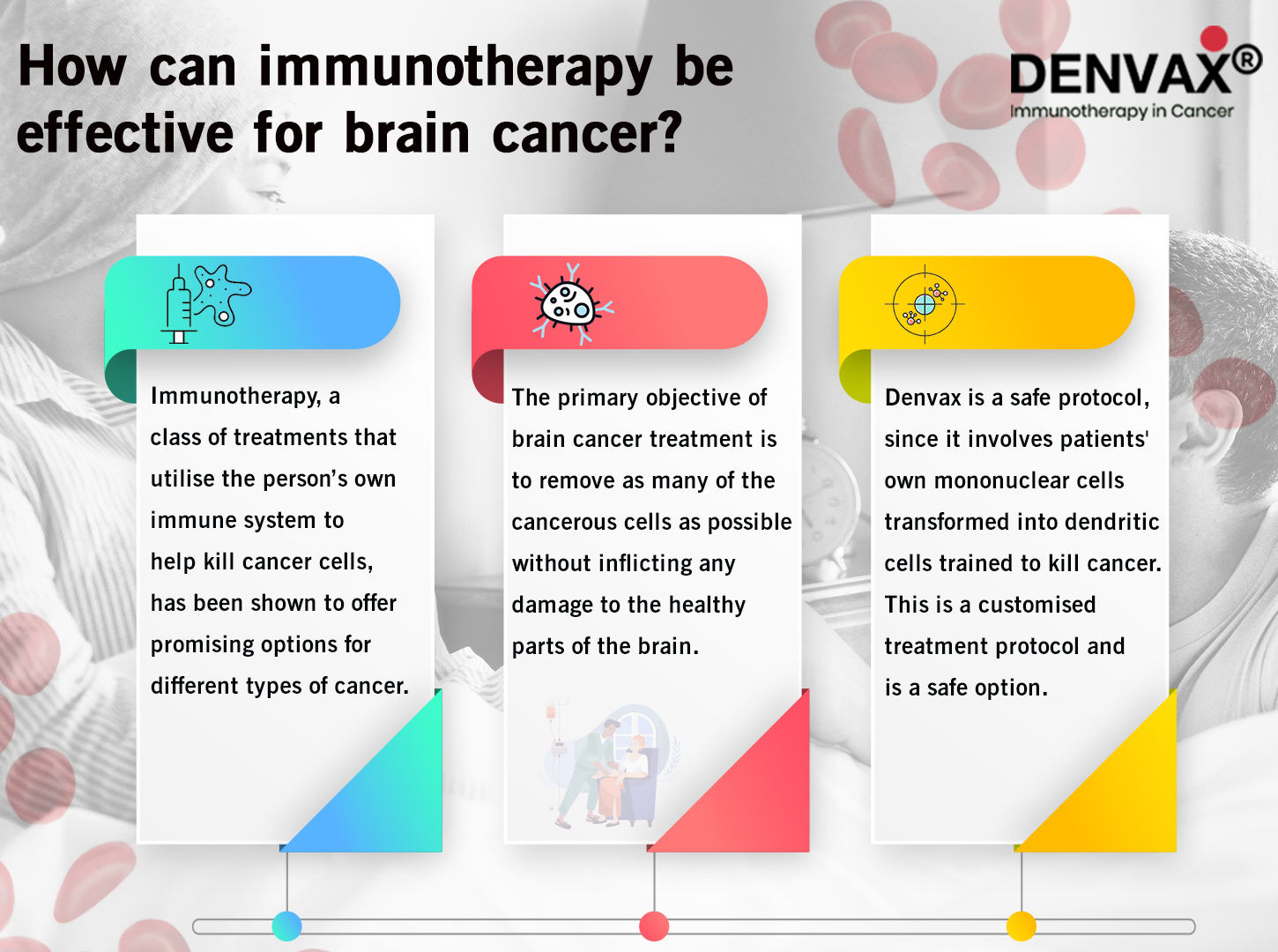 
1. Adoptive T-Cell Immunotherapy: This is aimed at boosting your vital immune cells. It involves removing the T cells from the tumour and then identifying which ones are best for fighting the growth. Once it is figured out, scientists can genetically engineer the genes in those cells in a way that makes them stronger. Then these cells are returned to your system through an IV. This has proved to be quite effective for different types of cancer.

2. Checkpoint inhibitors: Our immune system has several checkpoints, which act as brakes by stopping itself from killing healthy cells. Cancer cells can sometimes take advantage of this and disguise themselves as normal cells, so that your system does not recognise them as harmful. Checkpoint inhibitors are drugs that help your system see cancer as a problem and then fight it.

What is Brain Cancer?

Brain cancer refers to a malignant mass or growth of abnormal cells in the brain. It can also start on other parts of your body and spread to the brain as secondary (metastatic) brain tumours. It can majorly affect the functioning of the nervous system, depending on the growth rate as well as the location of the brain tumour. Its symptoms can include weakness, difficulty walking and/or dizziness, seizures, headaches, and so on. Other common brain cancer symptoms are nausea, vomiting, blurry vision, a change in the level of alertness/mental capacity/memory/speech/personality of a person, and/or hallucination. Brain cancer is usually diagnosed with the help of history, physical exam, a CT or MRI brain imaging procedure. Sometimes, a brain tissue biopsy is done.

Traditionally treated with chemotherapy, radiation therapy, and surgery, brain cancer can affect both children and adults. Cancers of the brain and nervous system come in several different forms, though these cancers' cause is yet to be fully understood. Despite significant research to analyse the biology of these cancers, the mortality rate has remained steady for over three decades. With the growth in the size of brain tumours, they can lead to a wide variety of painful and life-altering symptoms for patients suffering from this disease. This is often due to the pressures inflicted by these tumours on the brain. Also, these tumours can interfere with normal, healthy brain and nerve function. Most brain cancers are highly invasive, though this disease hardly spreads to other parts of the body.

Immunotherapy, a class of treatments that utilise the person’s own immune system to help kill cancer cells, has been shown to offer promising options for different types of cancer. Immunotherapy drugs, also known as immune checkpoint inhibitors, have proven effective for patients with certain types of cancer, including melanoma and lung cancer. But these drugs generally do not work very well in the case of glioblastoma, the most common form of brain tumour. This is because the brain is guarded by a membrane called the blood-brain barrier, which selectively blocks the types of substances that can make their way into the brain through the bloodstream. This barrier helps keep harmful substances such as bacteria at bay. However, this means it can also prevent helpful ones such as cancer drugs from reaching the brain tumour.

The primary objective of brain cancer treatment is to remove as many of the cancerous cells as possible without inflicting any damage to the healthy parts of the brain. Denvax has proven to be particularly useful for brain cancers, including WHO grade IV glioma, also referred to as Glioblastoma multiforme (GBM). GBM suggests advanced stage glioma, which is the most invasive type of cancer, often referred to as grade IV astrocytoma. These are the most aggressive tumours that present unique challenges, one of which is the blood-brain barrier (BBB). Most chemotherapeutic agents fail to cross this BBB. Denvax manages to cross the BBB and make the cancer-fighting dendritic cells available to the tumour cells. Denvax is a safe protocol, since it involves patients' own mononuclear cells transformed into dendritic cells trained to kill cancer. This is a customised treatment protocol and is a safe option. It is cancer immunotherapy, the fourth modality of cancer treatment.

Pioneered by renowned cancer Immunotherapists Dr. Jamal A. Khan and Dr. Sharmin Yaqin, Denvax clinic is headquartered in New Delhi. Its chain of clinics is spread across several locations such as Mumbai, Hyderabad, Ahmedabad, Kolkata, Chennai, Malaysia, and the UAE. These clinics are known for offering immunotherapy for different types of cancer, including brain cancer, breast cancer, stomach cancer, oral cancer, oesophagus cancer, gallbladder cancer, liver cancer, and so on. Driven by the mission of making cancer treatment affordable and accessible to a larger population, Denvax clinics with a high immunotherapy success rate aim to benefit many patients from high quality, meaningful research. Denvax is a targeted treatment plan that rejuvenates the immune system by transforming a patient's own cells into cancer-fighting dendritic cells.

For detailed information, give us a ring on our toll-free number 1800 123 1132 or email us at contact@denvaxindia.com.